Homeowners told permits for their home renovation will cost an extra $11,000, thanks to upzoning in Seattle 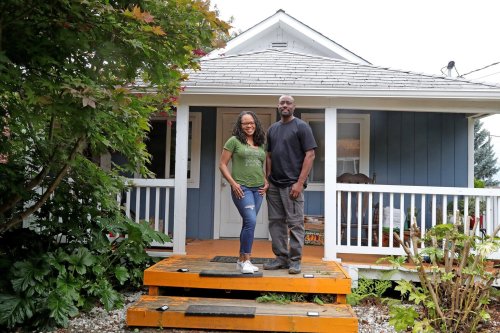 The city of Seattle has demanded that Erika Cherry and her husband, Andre, pay $11,000 to the city’s affordable housing fund because their home-renovation project was extensive enough to qualify as new construction.

The house was always going to need a little work.

An unpermitted second bedroom extending into the back alleyway “bounced” when entered, said Erika Cherry, who bought the 650-square-foot Seattle home with her husband, Andre, in late 2018. When the Cherrys demolished a wall, they found newspapers from 1916 — the year the house was built — in place of insulation. Six-foot-tall Andre could touch the low ceilings when he reached up.

But the Cherrys loved the Highland Park neighborhood, where they’d been renting since 2014. And at $325,000, the house was a steal. They filed what Erika Cherry thought were relatively modest plans to renovate the home with the city’s Department of Construction and Inspections in early 2019. They’d bring the addition up to code, enclose the front porch and raise the roof to make the attic livable, on a budget of less than $60,000.

The city didn’t see it that way. A reviewer said the renovation was substantial enough to qualify as new construction. According to rules passed in 2019, the Cherrys would need to pay $11,000 to the city’s low-income housing fund if they wanted their permit, in addition to the regular permitting fees. That’s more than the Cherrys — already spending $4,200 per month on rent and mortgage while permitting drags on — were willing to pay.

The proposed renovations doubled the square footage and left “very little” of the existing home, department spokesperson Bryan Stevens said in an email. “We have not yet issued the permit and are open to reconsidering if the owners have new information they can provide demonstrating that more of the existing home will be preserved,” Stevens wrote.

The Cherrys say they shouldn’t be penalized for increasing the value of their home, in part by bringing it up to code. The issue is one of equity for the city’s Black residents, Erika Cherry said, who have been displaced from historically Black neighborhoods in part due to upzoning that made the properties more attractive to developers.

The Cherrys have demanded the city grant the permit. If the city refuses, Erika Cherry said, they plan to sue.

The scenario reflects much of the debate over the city’s 2019 Mandatory Housing Affordability plan, which upzoned 27 neighborhood hubs — including Highland Park — with the requirement that new housing there either include low-income apartments in their buildings or be assessed a fee.

The premise of that plan was that more density would mean more affordability. Residents displaced from neighborhoods like the Central District because of rising rents and property taxes would be able to return to new, less-expensive apartments, proponents promised.

It’s not clear that’s been the effect, said real estate agent and Central District native Nicole Bascomb, who is Black. Apart from a few exceptional instances, she hasn’t seen the housing being built in the neighborhood being filled with Black renters, she said. And developers continue to buy out Black homeowners. 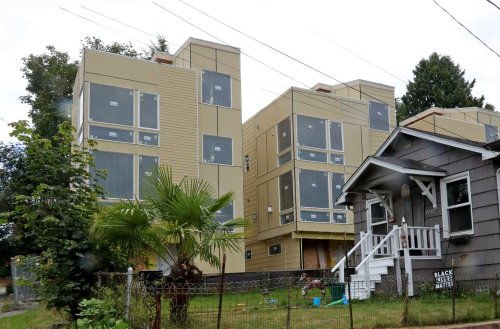 “The only development I’ve seen since MHA are high-priced townhomes, squeezed three or four on a lot,” Scott said, like the three under construction down the street from the Cherrys. “That’s not the affordable housing we were promised.”

To Erika Cherry, it seems the city is “enabling the transfer of wealth from Black homeowners to developers,” she said, by making it more difficult for those homeowners to hold on to their properties.

In recent weeks, as protests against racism have swept across Seattle and the nation, some have pointed to Seattle’s zoning as perpetuating discrimination. While there hasn’t been an in-depth study of the relationship between Seattle’s recent upzoning and race, mapmaker Kate Macfarlane recently compared a map of the city’s single-family-zoned housing with historical redlining designations. It seemed to her, she said, that neighborhoods that were more diverse in the 1930s are where apartment blocks line the streets today. Conversely, many of Seattle’s historically white neighborhoods — including those with racist covenants in their deeds — remain zoned for single-family housing today.

More broadly, it’s no secret, said Dan Bertolet, a researcher at the Sightline Institute, that “wealthy places are much better at preserving their single family zoning. The zoning is exclusionary on purpose — that’s what people wanted.”

The city disputed racial inequities in upzoning. Upzoned neighborhoods “are spread throughout the city and do not concentrate in a specific geographic area,” Stevens wrote.

Macfarlane said she supports denser, more walkable neighborhoods, but wishes wealthier — whiter — neighborhoods were upzoned along with places like Highland Park. “When we look at the Central District and we say, it’s close to downtown, it has great bus service, we should allow more housing here,” she said, “we should apply the same criteria to Madison Park, and North Capitol Hill and Queen Anne.”

The Cherrys have partnered with national libertarian law firm The Institute for Justice to press their case with the city. Erika Cherry said she didn’t consider the ideological fit when looking for an attorney, and the firm was the first to hear them out.

Their attorney, Bill Maurer, said asking the Cherrys to pay into the affordable housing fund showed the city’s building code is fundamentally flawed. “If this is what the city intended when it passed Mandatory Housing Affordability,” Maurer said, “maybe it should go back to the drawing board.”